Before reading this article, you may have a look at my previous article [2]“Transformer? Attention!” in which I explain “Attention mechanism” and “The Transformer”. Early in 2020, Facebook AI proposed a new way to use the Transformer in object detection task in paper [1]“End-to-End Object Detection with Transformers” in which they present a new method that view object detection as a direct set prediction problem. For now, it only has its basic version that means that it still has quite a lot of potential and can be optimized. However, it has already significantly outperformed competitive baselines for accuracy and run-time.

There are four special characteristics for this model:

Training code and pretrained models are available at “End-to-End Object Detection with Transformers”.

Starting from the initial image $x_{img}\in R^{3\times H_0\times W_0}$(with 3 color channels) and All imput image are batched together, applying 0-padding adequately to ensure they all have the same dimensions ($H_0, W_0$) as the largest image of the batch. The conventional CNN backbone generats a lower-resolution activation map $f\in R^{C\times H\times W}$ as a set of image features. The dimensions of this feature map are $C = 2048$ and $H,W = \frac{H_0}{frac}, \frac{W_0}{frac}$ where frac is 32 for DETR and 16 for DETR DC5.

Each encoder layer has a standard architecture ([3] “Attention is all you need”)and consist of a multi-head self-attention module and a feed forward network (FFN). The encoder follows the following steps:

The decoder follows the standard architecture of the transformer too, transforming $N$ embeddings of size $d$ using multi-headed self- and encoder-decoder attention mechanism. To be noted that this model decodes the $N$ objects in parallel at each decoder layer(not autoregressive). Since the decoder is permutation-invariant, the N input embeddings must be different to produce different results. These input embeddings are learnt positional encodings that we refer to as Object Queries. These queries are added to the input of each attention layer similarly to the encoder.

It follows the following steps:

Using self- and encoder-decoder attention over these embeddings, the model globally reasons about all objects together using pair-wise relations between them, while being able to use the whole image as context.

The final prediction is computed a 3-layer perceptron with RELU activation function and hidden dimension $d$, and a linear projection layer. Like YOLO, The FFN predicts the normalized center coordinates, height and weidth of the box w.r.t. the input image. It predicts also the class label using a softmax function. An additional special class label $\varnothing$ is introduced and is used to represent that no object is detected within a slot (The “background” class) as we predict a fixed-size set of N bounding box, where N is usually much larger than the actual number of objects of interest in an image.

It is helpful to use auxiliary losses as [4] “Character-Level Language Modeling with Deeper Self-Attention” in decoder during training, espacially to help the model output the correct number of object of each class. The idea is to add prediction FFNs and Hungarian loss after each decoder layer. All predictions FFNs share their parameters. An additional shared layer-norm is used to normalize the input to the prediction FFNs rom different decoder layer. 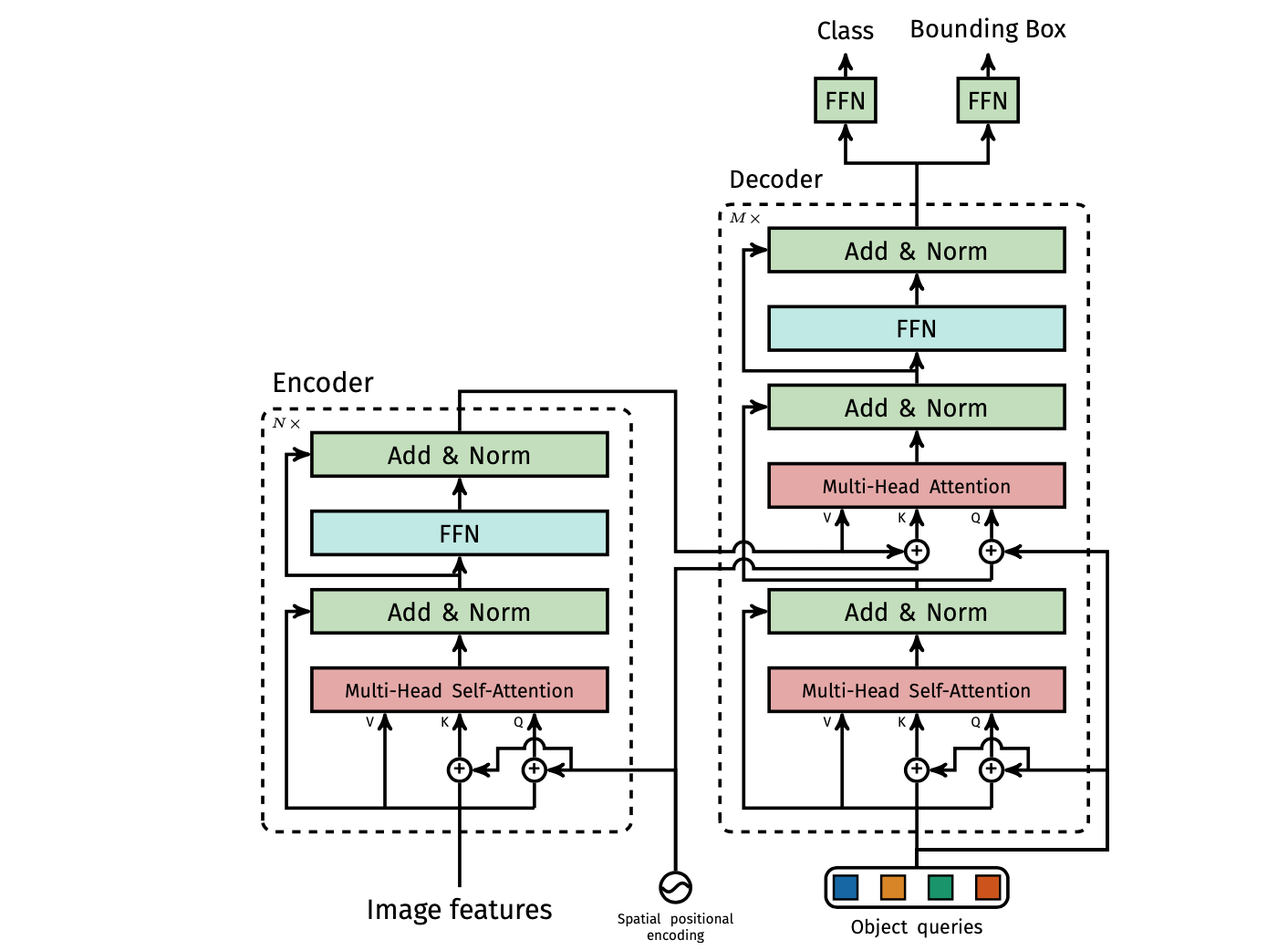 As we mentioned at the beginning, this model views object detection as a direct set prediction problem.The basic set prediction task is mutilabel classification and is does not apply to problem such as detection where there is an underlying structure between elements(i.e., near-identical boxes which need post-processing like NMS to eliminate duplicates). So we designed a loss based on the Hungarian algorithm to find a biopartite matching between ground-truth and prediction. In this way, it enforces permutation-invariance, and guarantees that each target element has a unique match by making the model to learning the underlying structure between elements and makes the pipeline post-processing free. To ensure the performance, we use also parallel decoding for the transformer.

The key element for training prossess is the loss function. DETR infers a fixed-size set of N predictions, in a single pass through the decoder, where N is set to be significantly larger thatn the typical number of object in an image and we need to score predicted objects (class, position, size) with respect to the ground truth. So the loss function following two steps:

Search for the permutation

where $\mathcal{L}_{match}(y_i, \hat{y}_{\sigma(i)})$ is a paire-wise matching cost between ground truth $y_i$ and a prediction with index $\sigma(i)$. This optimal assignment is computed efficiently with the Hungarian algorithm, following prior work (e.g. [5]“End-to-end people detection in crowded scenes”).

After finding our optimal permutation $\hat{\sigma}$ in the last procedure, we compute the loss function in this step. The loss function is defined as a linear combination of a negative log-likelihood for class prediction and a box loss defined later:

To mitigate the scales problem of $l_1$ loss which induce the inconsistency between big object and little object, a linear combination of the &l_1& loss and the generalized $IoU$ loss is used.

where $\lambda_{iou}$, $\lambda_{L1} \in \mathcal{R}$ are hyperparameters. These two losses are normalized by the number of objects inside the batch.

To DETR panoptic segmentation has 4 parts:

DETR is a new design for object detection systems based on Transformer and bipartite matching loss from direct set prediction. It is one of the most popular model in 2020. Without bells and whistles, it achieves comparable results to a well optimized Faster R-CNN baseline on the challenging COCO dataset.
This new design for detectors also comes with new challenges, in particular regarding training, optimization and performances on small objects and it has large potential to be optimized.